(You may watch the video describing this article on https://youtu.be/EDvDqrjOovs)

Whenever a river passes through more than two states there are very high chances of dispute on water sharing.

To handle this type of inter-state water dispute there is an Interstate River Water Dispute Act, 1956. This was enacted during the time of reorganization of states. As per this act a tribunal can be constituted which will have all the power which a Supreme Court is having. But there is no time limit till when Tribunal has to give its verdict.

This article talk about this type of dispute related to Cauvery River. To understand the dispute it is important to understand the little geography here. Cauvery river basin is spread through states of Karnataka, TamilNadu , Kerala and Puducherry as show in following map. 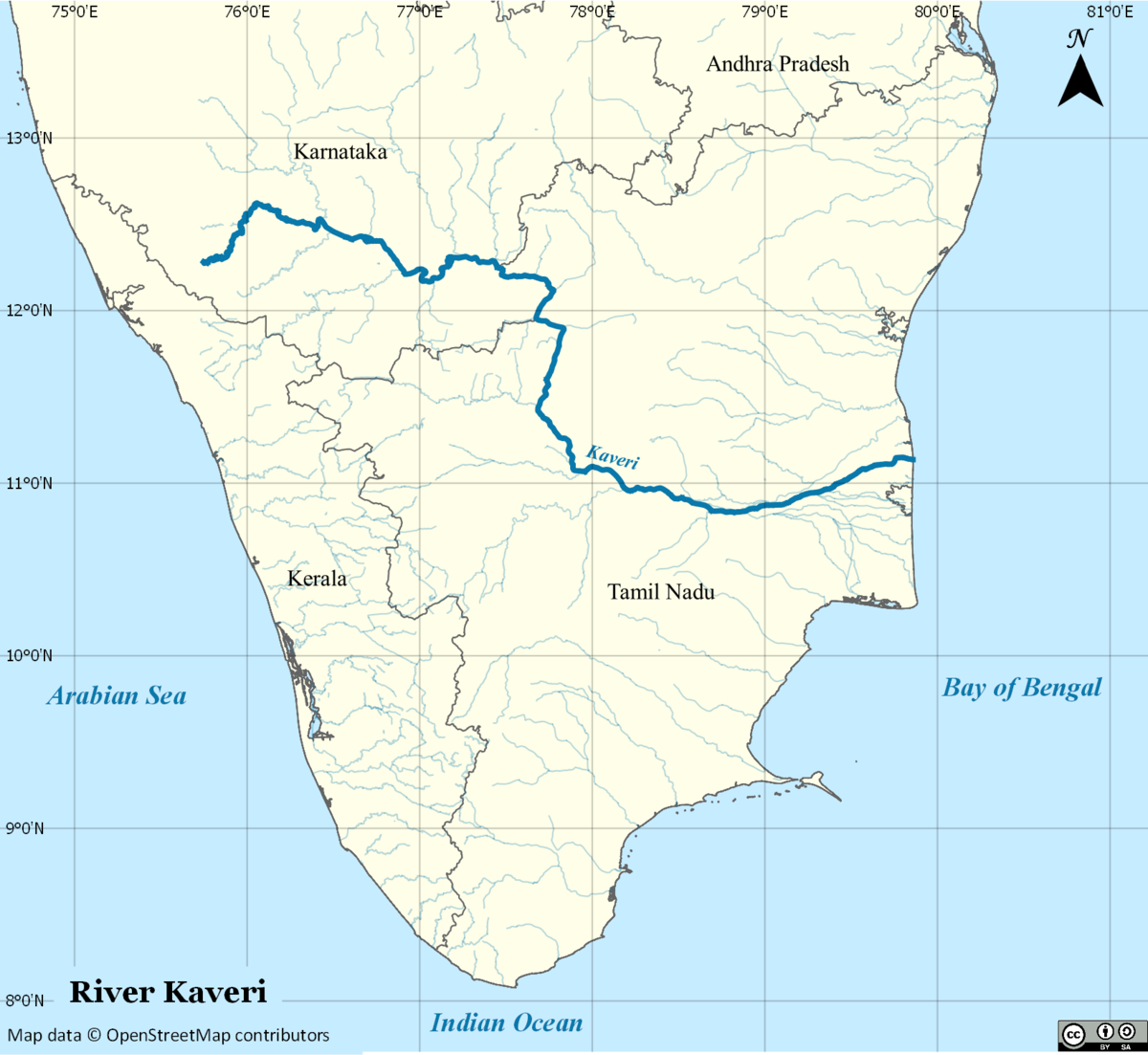 But water dispute is majorly between Karnataka and Tamil Nadu. And this issue emerges generally during the time when the monsoon is not good. In fact it is a classical case representing how a Monsoon can cause disturbance not only to economic stability to social and political stability. Also it is a good case study for challenges in having a federal democracy.

This Dispute is not new one; it has been there since the time of British Raj. The first time there was agreement on water sharing in 1882 and then in 1924. At that time the agreement was between Kingdom of Mysore and Madras Presidency. Under this Agreement 75% will be utilized by Tamil Nadu and Puducherry a, 23% by Karnataka and rest by Kerala. Any dispute between the states is settled by arbitration. Lots of disputes like construction of Dam by one state or not given enough water was continued between the states. These disputes become sever after 1956 (reorganization of states). The 1924 agreement was for 50 years and getting expired in 1974. That’s why in 1972 a committee was constituted, which has given its recommendation in 1976. However states were not happy with the recommendation. Karnataka built 4 dams on Cauvery in 1960s and 80s. Subsequently in 1986  Tamil Nadu to approach the Center for setting up the tribunal, but center was reluctant to do that. Subsequently Tamil Nadu approached Supreme Court.

And the direction of Supreme Court a Tribunal headed by Chittatosh Mookerjee was constituted in 1990. It has given Interim award (order) on water sharing in 1991, under which 205 TMCFt( Thousands Million Cubic Feet) need to be provided to Tamil Nadu. Further some restriction on Karnataka on usage of water. This has resulted in dissatisfaction and resulted in violence in two states. However this was not implemented. Finally in 2007, Tribunal has given its final order. This order talked about water sharing among four states in following order

Along with that is has also recommended the constituting Cauvery Management Board (CMB). It was in 2013, when Cauvery water tribunal order was notified by govt.

Karnataka, who were not happy with Tribunal decision, approached Supreme Court. For the first time Ground water Reserve is also taken into account and Supreme Court gave its final verdict where it has reduced the water allocation to Tamil Nadu and increase it a bit for Karnataka. Also it ordered the Karnataka to release the 177 TMC of water from interstate Biligundlu Dam.

Further, it has asked the Center Govt to constitute Cauvery Management Board (CMB). However government has failed to do so.

Tamil Nadu’s Members of Parliament was demanding it constitution and has disrupted the parliamentary proceeding which was resulted into total wipe out the 2nd half of Budget session of parliament.

Now let’s look at the CMB in little more detail.

1. CMB would be under Ministry of water Resources.
2. It is permanent body
3. Members

a. Central Govt. Nominated persons and ex-office members.
b. Director: Chief Engineer of above ( with 20 years of experience)
c. One person from each concern state
d. Engineer not belonging to state.

4. Expenses of CMB will be shared among states as below

a. All decision would be taken on voting Basis

a. Will Implementing the Tribunal Recommendation:
b. Collect data from Cauvery basin
c. Monitoring Monsoon , Drought , rainfall etc.
d. Setting up network for this monitoring.
e. If for consecutive 2 years of drought then water share on decided formula

For more detail timeline you may refer :  http://www.thehindu.com/news/resources/cau

Send us your query